With the global population steadily rising, the consumption of seafood is likely to double by 2050. However, over a third of fish stocks are overfished and 60% are fished to their maximum potential, while the rapid expansion of aquaculture has led to concerns such as pressure on feed resources, in particular fishmeal and fish oil from forage fish. With the global supply from fisheries reaching its sustainable limit, using all possible sources of fishmeal and oil, including by-products from aquaculture, is critical. 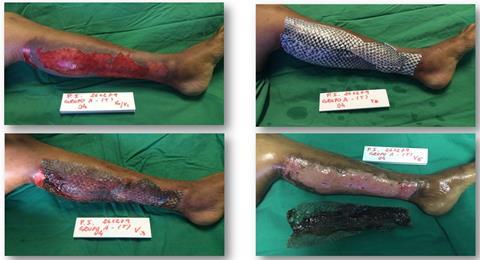 A single tilapia skin heals this burn in 10 days

One innovation that could prevent seafood by-products from going to waste lies in Brazil, where researchers at the Federal University of Ceará are treating severe burns using the skin of tilapia.

Tilapia is one of the most consumed and produced fish in Brazil. However, it generates a large number of by-products such as the skin and viscera, which are routinely discarded. The treatment for burns was spearheaded by a group of researchers including Dr Edmar Maciel at the Federal University of Ceará, who began to investigate whether tilapia skin could be used as a biological dressing. Maciel and his team say that the skin could ease the pain of victims and cut medical costs, while it also contains optimum levels of collagen.

The traditional treatment for burns in Brazil is dressings, silver sulfadiazine ointment and bandages. But silver sulfadiazine must be applied periodically, which is painful for the patient. In the meantime, using biomaterials such as biosynthetic dressings, or artificial and xenogeneic skins is becoming increasingly unfeasible due to high costs.

Brazil also has only four banks of human skin, which don’t readily provide enough skin to attend to the vast demand of burn patients across the country. There are also no supplies of animal skin, leaving silver sulfadiazine ointment the only curative treatment available.

But with moisture, collagen and mechanical resistance at levels comparable to human skin, tilapia skin has huge promise.

“Not only is it a physical barrier or occlusive material, but it also interacts biochemically with the burn. It’s an effective form of pain control and has better control over inflammation,” said Maciel and his colleagues Carlos Roberto Koscky Paier and Gustavo Manfredi.

“The tilapia we use comes from family breeders and cooperatives of small producers from the Castanhão reservoir, the largest reservoir in Ceará and one of the largest in Brazil,” they continued. “We also formed an agreement with a company that raises tilapia and produces fillets. Skin analyses from this company show superior microbiological quality, so their tilapia is more favourable as a medical product compared to other small producers.”

First step in the process is to select and prepare batches of tilapia skin with the maximum amount of collagen. Lab technicians wash them in running water, place them in sterile containers and send them to a laboratory on ice for cleaning and scraping. A chemical treatment is carried out for decontamination, detoxification and preparation before the skin is vacuum-packed and sent for gamma ray application. After this, it is kept in a cold environment. Alternatively, it can be freeze-dried before being vacuum-packed and irradiated, so it can be stored at room temperature.

Inpatients with superficial second-degree burns that heal in around 10 to 12 days, tilapia skin is applied and left until the end of treatment, with no need to remove or change the skin.

After healing, the skin detaches with running water and liquid Vaseline. For deep second-degree and third-degree burns, the skin must be changed a few times over several weeks. For example, deep second-degree burns heal in around 20 days and the skin must be changed three or four times, as opposed to ointment, which must be reapplied every one or two days, resulting in greater pain for the patient, more working hours for staff and more anaesthetics and analgesics.

The skin is also changed between five and seven days in third-degree burns. Studies have shown that the patient feels less pain during healing and skin changes compared to conventional treatment, said Maciel, Paier and Manfredi.

“From a medical point of view, it is much easier to use tilapia skin,” they said. “Cost and production are not a problem because tilapia is the most produced fish in Brazil and the most sold in the entire Brazilian market, while using it for medical purposes reduces the disposal of by-products and any negative environmental impact. However, there is a challenge in transferring this from research labs to other sectors due to Brazilian legislation.”

But hopes are high that the skin may become a boon to others elsewhere.

“There has also been talk of large clinical trials to treat eye wounds in dogs, involving the US, Europe and Japan. As for marketing tilapia skin as a product, we are still a long way off due to the difficulty of transferring technology to enable large-scale production. But work is ongoing in other applications such as dentistry and ophthalmology. Tilapia skin is very abundant here, with several advantages and benefits, and many studies are underway.” 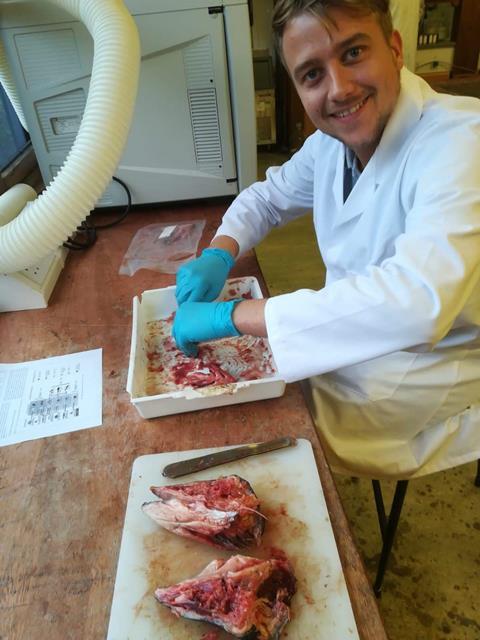 Wesley Malcorps at the University of Stirling’s Institute of Aquaculture has been researching the potential uses of aquaculture by-products. As part of the Green Aquaculture Intensification in Europe (GAIN) project, he has determined that a large proportion of commonly farmed species like Atlantic salmon, European seabass, gilthead seabream, turbot and common carp are routinely wasted, despite the potential to get value from them.

“By-products such as fish heads, frames, trimmings, skin and organs represent a large proportion of the whole fish, around 50% or so,” he said. “They could be better used, but instead they are poorly utilised and discarded at the processing or household level. They don’t sound appetising but extracting more flesh from by-products and using it in soup, for example, increases food supply, while feed production could also be explored – feeding by-products back to fish or livestock or incorporating them in pet food. There is also the option to process by-products into collagen supplements or leather made from fish skin.”

Norway is an example where full processing takes place and most aquaculture by-products are utilised, but there is still potential to increase volumes and value addition, said Malcorps.

Elsewhere, mixing by-products is still a common practice, most of it directed to animal feed. But the absence of sorting and grading them can dilute nutritional value, consequently limiting potential (high-value) applications, while there are other infrastructure challenges, such as the scale and accessibility of processing facilities, which limits the economic incentives to use by-products.

Obtaining certain ingredients from by-products can also be cost-intensive, while some may contain (chemical) contaminants and require investments in decontamination and/or HACCP to meet food grade requirements.

“The strategic utilisation of fish by-products also requires traceability and transparency along the supply chain to identify any inefficient use, and verify the origin, quality and treatments used,” said Malcorps. “This is crucial to verify by-product status in relation to (EU) laws on category contamination and hygiene risks.

“We have briefly explored the role of distributed ledger technology (DLT) to inform stakeholders on a shared network throughout value chains. This allows secure, transparent transactions, in which information is nearly impossible to change or hack. It also enables trust between stakeholders that facilitates increased supply chain efficiency and transparency, supporting circular economy principles and meeting consumer demands for sustainable products.”

Back in Brazil, Maciel, Paier and Manfredi have received positive feedback from fisheries and aquaculture. They say that using a by-product like tilapia skin means a great deal to both industries.

“They are happy to contribute to research and the advancement of science,” they said. “Our work aims to improve people’s quality of life and for many companies this is a significant contribution to society that they can make. Food production firms also have a great role to play in supplying by-products and showing that they are part of something that is making a difference.”

“There are issues to address in terms of technology and infrastructure, but seafood by-products show promising characteristics, and can be directed into food, feed and industrial applications,” said Malcorps. “This is an opportunity for aquaculture to diversify its products while using marine resources more efficiently.”