In its latest report into seafood fraud, Oceana has found that commonly swapped species in the United States can cost up to twice as much as their cheaper counterparts. 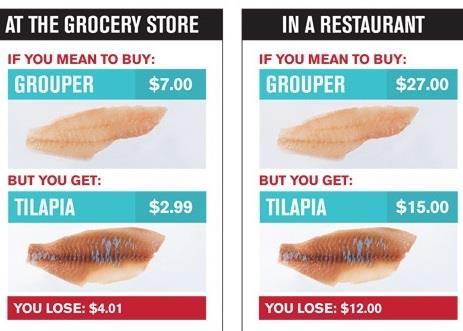 In February, Oceana released a study that found one-third of seafood tested across the country was mislabelled according to Food and Drug Administration (FDA) guidelines. This new report follows up on Oceana’s results by examining the economic cost of seafood fraud that is passed on to consumers who pay for a high-quality fish and receive a less expensive or less desirable species.

“Swapping a lower cost fish for a higher value one is like ordering a filet mignon and getting a hamburger instead,” said report author and Oceana senior scientist Margot Stiles. “If a consumer eats mislabelled fish even just once a week, they could be losing up to hundreds of dollars each year due to seafood fraud.”

Oceana interviewed experts working in the seafood industry to figure out what drives cost differences for different species, as well as reviewed 300 menus from 12 different cities to help estimate retail prices. According to the report, a substitution of lower cost species like tilapia for the more expensive grouper could gouge consumers more than $10 for an eight ounce fillet in a restaurant, and the common mislabelling of farmed Atlantic salmon for wild salmon can add an extra $5 to a customer’s bill.

“Consumers deserve to know their seafood is safe, legally caught and honestly labelled, including information like where, when and how it was taken out of the ocean. The more information that follows the fish, the harder it will be for fraudsters to rip off American consumers,” Ms Stiles said.

Oceana is urging policymakers to move the Safety and Fraud Enforcement for Seafood (SAFE) Act forward – legislation which would require traceability for all seafood sold in the US.

You can read the report here.