The Nueva Pescanova Group has launched the third vessel of its new fleet and the second of three 50m long wetfish ships that are being built for hake fishing by the Group’s affiliate in Namibia. 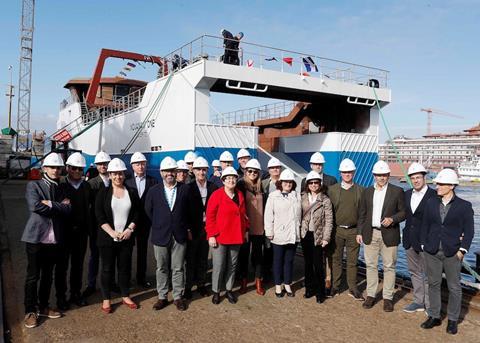 Featuring high energy efficiency engines for reduced consumption and emissions, the NovaNam One was launched at the Armón shipyards in Vigo, Spain.

In addition to its high performance engines, the vessel notably has improvements in the onboard processing system and greater comfort for the crews compared to older vessels.

After recent deliveries of the Lalandii 1 and Ponta Matirre, which are already in operation in Namibia and Mozambique respectively, NovaNam One is the next in line of the seven new vessels with which the company is renewing their fleet.

The total investment, the largest that has been made in Spain so far by a company in the fishing sector, was around €42.5m and is creating 200 jobs in the region.

The delivery of the NovaNam One is scheduled for the middle of the year and will join the fleet of 70 ships operating in the southern hemisphere.