‘Home-bred’ lobsters to be released into the sea 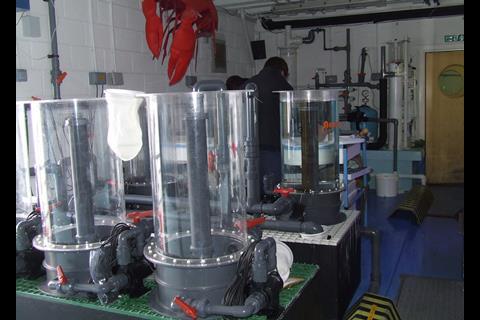 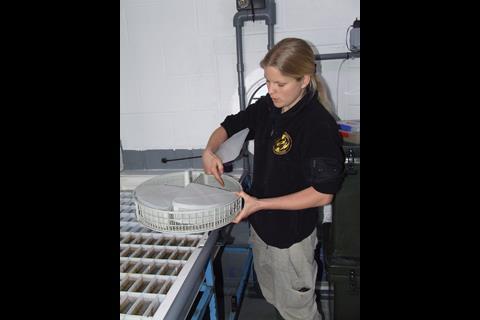 As part of an ongoing project to improve breeding success of the European lobster, recreational divers from Bude in Cornwall, UK, will be releasing up to 1000 six week old juveniles into the no-catch zone surrounding the wreck of the ‘Coronation’.

The Coronation is a 96 gun, Royal Navy second rate ship-of-the line, which sank off Penlee Point near Plymouth, Devon, in a mighty storm in August 1691 with less than 30 survivors out of a crew of over 600.

Shortly after the discovery of the wreck site in 1967 the area was designated as a no take zone and left undisturbed by commercial fishing for over 40 years. Divers will now be able to establish how well the artificially introduced lobsters manage to integrate with the long-established population.

After introducing the tiny crustaceans reared at Padstow, to their habitat of shale covered mud, scientists from the National Lobster Hatchery on the North Cornwall coast will then commence a six-year study to monitor the health and long-term survival of the tiny juveniles up to legal catch size. The National Lobster Hatchery has been open to visitors since 2004 and in its first release year, returned 10,000 juveniles. In 2011, numbers rose to around 30,000.

The hatchery has been receiving ‘berried’, egg bearing hen lobsters donated by local fishermen, for the past four years. The females are then carefully disinfected before being placed into a tank of re-circulating seawater until the eggs have hatched and the newly born larvae have swum to the surface where they are collected. The females are then returned to their fishermen donors, who are encouraged to tail-notch and release to breed once again.

Sea imitation
The newly hatched larvae, about 5mm in length, are then placed into cone-shaped tanks, where sterilised seawater constantly swirls them around, imitating the sea’s surface motion, which prevents them from coming into contact and eating each other.

Technical assistant, Carly Daniels, has been working with the National Lobster Hatchery for the past seven years, and due to a dearth of scientific information about the effects of pro-biotic dietary supplements in aquaculture, she gained her Doctorate as a result of a three year study on the effects of adding commercially produced pre and pro-biotics into the diet of brine shrimps (Artemia), a principal food source for larval and juvenile lobsters.

Ms Daniels discovered, that by feeding baby lobsters with a gut-conditioning pro-biotic bacillus (Bacillus spp) and pre-biotic Mannan oligosacharides (MOS), a complex sugar extracted from the cell wall of the common yeast, continuously for 18 days, live weight gain, food conversion ratio and carapace length, as well as post larval quality, all dramatically improved. Not only did she observe a massive increase in the health and survival of the newly hatched lobsters, the brine shrimps’ vitality improved just as well. And for those of us who hope to live a long and healthy life, it may be worth noting, that the intestinal structure of a lobster is almost identical to humans.

When baby lobsters have completed their third moult, having entered their juvenile stage, they are taken from their communal containers and placed, individually, into segmented plastic trays for a further 30 days, where they are hand-fed oil coated pellets containing the same beneficial bacterial food source as supplied to the brine shrimps,.

Between six weeks and three months after hatching, according to the water temperature in which they were raised and the amount of food they have successfully converted into body weight, the lobsters are now ready to be set free.

Ms Daniels told World Fishing & Aquaculture, “We have previously relied upon a boat-mounted water flume to ‘launch’ our baby lobsters, with no evidence as to how many were ending-up as fast-food for hungry fish during their danger-filled descent to the sea bed.

“Now, thanks to the valuable assistance of Bude Dive Club, we have seized a rare opportunity to witness the behaviour of our home-bred lobsters, from the instant they leave their containers and begin burrowing into the mud, where they will spend the next 18 months feeding on passing plankton”.

20,000 eggs
A hen lobster produces up to 20,000 eggs during her breeding cycle, which she carries beneath her carapace for six months. Just one egg per clutch is likely to survive to adulthood and still may not live long enough to breed. Ms Daniels’ experiment with pre and pro-biotic dietary supplements has meant that around 85% of hatched larvae live to become juveniles, and their larval to adulthood survival prospects improved by at least 10%.

The hatchery is now preparing to explore other rearing methods to further increase production success, including testing the feasibility of rearing lobsters in open water in circular plastic cages, suspended from ropes and stacked in tiers like CD’s, where plankton and other food resources will be able to enter the cage without the lobster managing to escape.

Norway has been successfully farming lobsters away from the sea, since the year 2000, and successfully produced its first saleable lobsters in 2006. Recent results from the Kvitsoy Island project suggest it is viable to farm lobsters from hatching to marketable size (about 300g) in 24-30 months.

Lobsters grow more rapidly in clean water at 20oC, therefore a cheap heat source, the bi-product of a power-hungry industrial process or waste incinerator, may eventually mean boat-caught lobster will become a rarity. However, nature may be sending out a message telling science to proceed with great caution.

The Norwegian experiment involved farmed lobsters being fed a cod-based, commercially manufactured diet devoid of a caretinoid pigment, Astaxanthin. Astaxanthin interacts with a protein within the lobster’s shell to create its characteristic orange colour during the cooking process.

Astaxanthin is not only a colouring agent, but also a potent health-promoting antioxidant, which the lobster derives from its natural diet of algae. It is also claimed to play a large part in protecting human body cells against cancer. It fights-off dementia, defends against infection, is a powerful anti-coagulant and an effective anti-inflammatory. It is also used to treat diabetes. And for those prepared to listen, a stern reminder, that we are all what we eat, including the common European lobster, Homarus gammarus.