It’s a big ask to request a prediction of the future, but in the Blue Economy discussion of IceFish Connect, that’s exactly what moderator Nick Lambert wanted, and his panel were adamant that aquaculture is only going to grow.

Looking ten to fifteen years ahead, Iceland Ocean Cluster advisor Árni Mathíesen predicted that Iceland’s aquaculture production could triple from the 30,000 tonnes produced last year to in excess of 100,000 tonnes.

“After that, it depends on new technologies and how they develop,” he said.

“Aquaculture will continue to grow both here and elsewhere,” predicted Matorka chief commercial officer Árni Páll Einarsson, commenting that this is a key element of the production of the healthy and nutritious food the world needs.

“We can expect to see land-based and offshore farming grow. Traditional fish farming is also here to stay and will improve its environmental record, so we are going to see a mix of production systems.”

According to Helga Sigurrós Valgeirsdottir, senior account manager in corporate and investment banking at Arion Banki, this has to take place alongside a greater shift towards full utilisation, and energy shift – against a backdrop of rising population levels.

“There are growth opportunities. When we see what the capacity is for Iceland’s aquaculture, then we will see a move offshore. We also need to keep the carbon footprint in mind – and aquaculture has a lower carbon footprint than many other methods of protein production,” she said.

Árni Mathíesen stated that global consumption continues to increase, as do populations, despite predictions of this levelling off. As a result, food security, and particularly nutrition security, are becoming increasingly important.

“The discussion has been about calories, but that’s not enough. It’s about proteins, and there is an increasing concentration on fats and the fatty acids,” he said, commenting that seafood is the primary source for the highest quality fatty acids.

At the same time, only 2% of global food is sourced from the oceans, and while there are technical and environmental limits, where these lie remains unknown.

“The oceanic potential is fantastic. There’s a lot of opportunity,” he said, adding that there is a need to move down the food chain, as is done with terrestrial agriculture, while there is also a pressing need for the private sector to engage further.

Land-based
Árni Páll Einarsson said that Matorka has been in operation for ten years now as it rears Arctic char at its facility in southern Iceland.

“It hasn’t been easy, but we have learned a lot on the way,” he said.

Matorka has built up its production with an eye steadily on environmental factors, with 99.9% of the water it uses not suitable for agriculture, with a partial recirculation system and with water gravity-fed to its destinations, saving energy. Feed is also sourced from meal produced from trimmings and offcuts of fish processing, so there is no direct fishing behind its feed.

According to Helga Sigurrós Valgeirsdottir, Arion Banki is ahead of the game in green and blue financing.

“This is the only one with a meaningful position on aquaculture,” she said, explaining that there are some strict guidelines for financing blue projects – and this excludes financing for fishing vessels as they use fossil fuels as an energy source.

She commented that there is naturally a profit motive behind financing, and there is a question of whether or not it’s cheaper to go green.

“We expect to go in a green direction, and this is being driven by consumers,” she said, but added that to date, the ideology is still some way ahead of the reality of the industry.

“We need to see an energy shift, but these aren’t problems that are going to be solved overnight and these need to be discussed openly and honestly. The effects of all this have to be real,” she added.

Taking place between 16-18 November 2021, Icefish Connect is a brand new virtual commercial fishing exhibition with rich and engaging content that enables visitors and exhibitors to meet and develop business. 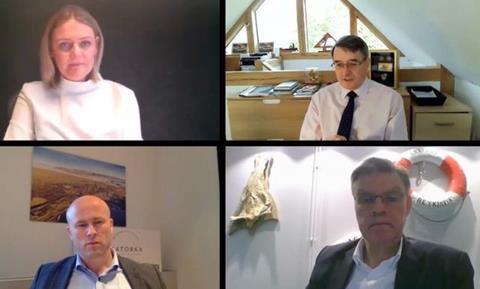