A year of intensive development and testing has gone into preparing the prototype Folla, and this has worked so well that Havfront’s partner, Husøy company Br. Karlsen, who were instrumental in initiating the Folla’s development, has already taken it into regular use – and Havfront will be at this year’s Icelandic Fisheries Exhibition to showcase both Loppa and Folla machines.

Designed to gut and head groundfish across the size range from from 1 to 20kg, the Folla goes back to 2017, when Terje Sørensen and Jakob Karlsen of Br. Karlsen saw what the Loppa gutting and heading machine for use at sea was capable of doing – and decided that this was the functionality they were looking for on shore as well.

“We were impressed by the Loppa, but it was not suitable for use on shore. At the same time, we were so dissatisfied with the machines we had that we suggested the idea of a shore-based machine,” Terje Sørensen said.

Their suggestion set things moving at Havfront, and having a partner to collaborate with in developing new technology is a key element of such a venture. Br. Karlsen provided opportunities and raw material for three rounds of full-scale testing under working conditions, as well as bringing their own input to the process.

“We’re grateful to Br. Karlsen for their commitment and hospitality. Without them as a test company, we would never have got the result we have with the Folla as it is today,” said Havfront’s Marius Strømmen, adding that they expect to develop this further.

Havfront is a member of the Måløy Maritime Group of companies which is again taking part in this year’s IceFish exhibition.

“We exhibited the Loppa at IceFish in 2017, and at previous exhibitions,” said MMG’s Miriam Edler. “Now we’re really looking for ward to presenting both the Loppa and Folla machines at this year’s event, which we see as a greta platform to showcase what the MMG companies are able to do. At the last exhibition in 2017, the Loppa we brought from Norway was sold at the exhibition, so we were able to show it with a ‘sold’ sticker on it.” 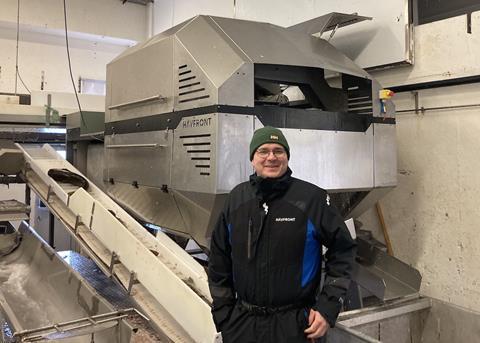