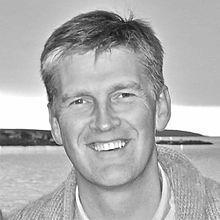 Thor Sigfusson is an Icelandic entrepreneur, author and speaker.

Thor received his PhD degree in Business from the University of Iceland in 2012. He launched the Iceland Ocean Cluster in 2011. The cluster focuses on developing innovative ideas in the blue economy. In May 2012, Thor founded the Ocean Cluster House in Reykjavik Iceland.

He is also the founder or co-founder of various enterprises in fish utilisation and food. Using the research and information generated from Iceland Ocean Cluster, Sigfusson founded Codland in September 2012. In 2013, he founded the company Collagen with the aim to use fish skin to create marine collagen. In 2017-2018 he founded Grandi Food Hall and co-founded Hlemmur Food Hall and Reykjavik Foods.

Thor has actively been promoting globally his 1000% fish utilisation mission and seafood clusters and he is the co-founder of three ocean clusters in the US; The New England Ocean Cluster, New Bedford Ocean Cluster and the Pacific Northwest Ocean Cluster. Spring 2020, the first Ocean Cluster House outside Iceland will open in Portland Maine.

He has written seven books on topics of international business, knowledge networks and salmon. His most recent book is “The New Fish Wave - Igniting the Seafood Industry” will be published by Leete’s Island Books in the US in April 2020.

Since establishing the Iceland Ocean Cluster, Sigfusson has spent his time speaking to audience in North America, Europe and Asia about the opportunities in building networks in the marine industry.